Finding your limiting factor and the plan to overcome it

We have all felt that our body’s performance starts to plummet, and we simply can’t run, lift, or move as effectively as we could moments earlier. This onset of fatigue and the accompanying deterioration in athletic performance may be routed in several sources, including our nervous system, nutrient supply, cardiovascular system, or muscles.

Out of all the systems that participate in the creation of movement and therefore intrinsically important to athletic performance, the most crucial one is the oxygen chain. The oxygen chain comprises all the organs that are responsible for the delivery and utilization of oxygen to release the energy to move and perform.

In this article, we will discuss how the oxygen chain works and how its analysis can reveal the presence of one’s limiting factor, the element that’s mainly responsible for hampering performance.

How our body produces energy

To better understand why the oxygen chain is the most critical system in determining athletic performance and, by implication, fatigue buildup, we should first dive into how energy is released in the human body.

The energy our muscles need to move and perform is found in the nutrients we consume through the food we ingest. These nutrients enter our digestive system and, through many pathways, are stored in various stores across our body, including adipose tissue, liver, muscles, and blood. The energy they pack is what we refer to as calories. The vast majority of energy is stored in fat and carbohydrate molecules. Depending on the part of the body they are stored, carbohydrates exist in the form of glycogen and glucose, with the former being the form with which carbohydrates are stored in skeletal muscle and the liver and the former being the form in which they are transformed prior to their consumption by cells. To put things into perspective, the average human will store approximately 30,000 calories in fat and 2,000 calories in glycogen.

At any given time, cells across the body utilize a combination of fats and carbohydrates to release their stored energy and produce movement. The process of breaking down these nutrients requires oxygen on almost every occasion and is therefore referred to as the oxidation of fats and carbohydrates. Specifically, oxygen is channeled to cells through the respiratory and circulatory systems. Inside the cell, specialized elements of the cellular structure called mitochondria use oxygen molecules to break down fats and carbohydrates and release the energy found among the bonds that form the molecules. This energy released from the bonds holding carbohydrates and fats together can’t be used “as is” by the cells to perform a specific task and must be converted into a usable form. This form is a ubiquitous compound called Adenosein tri-Phospate (ATP) and is considered the “battery” of our body, given its ability to store energy that can be released when broken down.

The energy released from the breakdown of fats and carbohydrates is used to cause Adenosime di-Phosphate (ADP) molecules to bond with one additional phosphate molecule causing it to become ATP. Therefore, ATP is a “higher” energy molecule capable of releasing its energy by shedding one of its three phosphate molecules and reverting back to an ADP state. This process called ATP-ADP turnover is the way through which energy is utilized within our cells and converted into movement.

The process of energy release described above makes the necessity of oxygen obvious. Without oxygen, our cells can’t oxidize fats and carbohydrates and thus cannot perform the ADP-ATP turnover process. Consequently, ensuring enough oxygen supply to the cells of the working muscles is the most critical factor for maintaining one’s ability to move.

The oxygen chain comprises all the systems necessary to ensure oxygen delivery to cells across the body. These include the heart, lungs, blood circulation, and cells. Oxygen is absorbed through the lungs with the help of specialized membranes found on their surface called alveoli. The alveoli capture oxygen molecules and transfer them to the circulating blood. Oxygen-rich blood is then pumped through the heart throughout the entire body. Finally, oxygen molecules in the blood are captured through the cells and channeled into the mitochondria, which are used to break down fats and carbohydrates.

What happens when the oxygen chain breaks

Each part of the oxygen chain may become less efficient in playing its role. A breaking point in any part of the chain will immediately reduce the overall amount of oxygen it can deliver to the cells of the working muscles. This in turn, will cause two things to occur.

The weak spot of your chain

Each component of the oxygen chain has the potential to become the weakest link and, therefore, the part that stifles oxygen supply to the cells. Everyone has a weak link in their oxygen chain that becomes the critical factor limiting performance past a specific exercise intensity. To better understand this, let’s analyze the analogy of a bicycle chain. A bicycle chain is made of several metal pieces connected which together transfer movement from the pedals to the rear wheel. When one pedal calmly, none of the metal pieces can transfer the force to its adjacent one and therefore help transfer rotation from the petals to the rear wheel. However, as one starts to pedal faster, the force that needs to be transferred by the chain to the rear wheel increases, and so does the force each metal piece has to transfer to its adjacent one. Assuming one of them is the weakest, increasing the force beyond a certain point would cause the chain to break at the weakest metal piece. 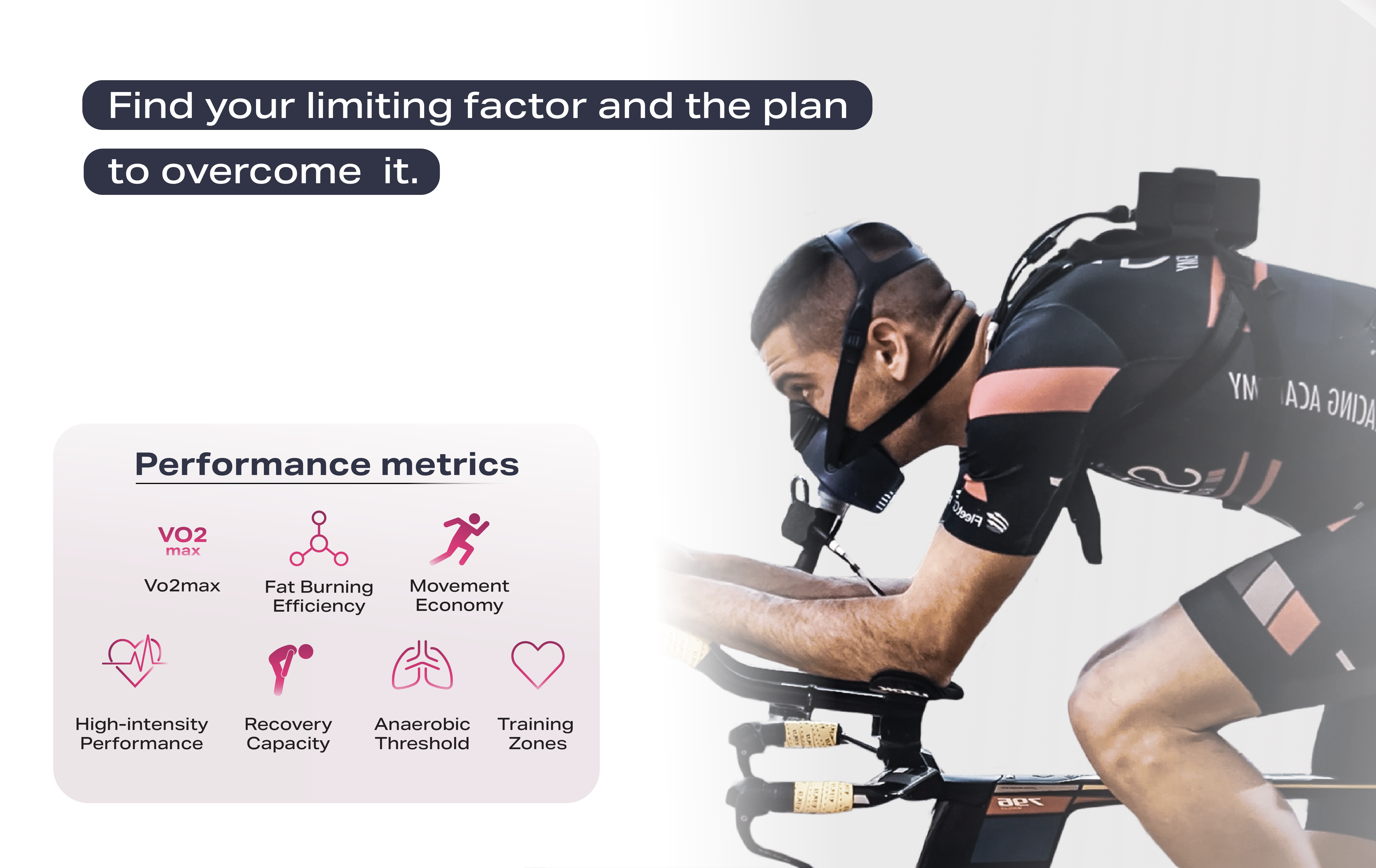 In the case of the oxygen chain, as one is exercising at low intensities, every part of the chain is able to perform well and transfer the amount of oxygen required. However, as exercise intensity increases, so does the amount of oxygen that needs to be transferred. When one of the four systems is becoming unable to transfer the necessary amount of oxygen, then this system becomes the weakest link and, therefore, the limiting factor for athletic performance. As described above, when this happens, Anaerobic metabolism comes into play, fatigue starts to build up, and energy availability from fat diminishes the body’s long-range energy supply.

Each part of the oxygen chain typically has specific reasons why it can become the limiting factor.

Let’s look into each one.

Oxygen is the hallmark of performance as it constitutes the indispensable element for oxidizing nutrients and using their energy to power movement. Simply put, without oxygen, there is no energy release and thus no movement or life. Oxygen supply is such a fundamental part of human existence that much of our anatomy has been structured around the absorption, transfer, and consumption of oxygen.

Analyzing the function of the oxygen chain and determining the part which poses the limiting factor is the essential step towards optimizing athletic performance since it helps target nutrition, training, and supplementation where they should. Each limitation requires different training, nutrition, and supplementation strategy to be overcome. As a result, in order to ensure that a program is truly focused where it should, one should first understand where the problem lies.

The analysis of the oxygen chain can most reliably take place through breath analysis, the only method that can evaluate how the heart, lungs, blood circulation, and cells work individually but also in unison. After identifying the limiting factor, one has the information needed to structure the program to overcome it.