How is heart health linked to breathing analysis?

Heart or cardiovascular disease is the world’s most prolific killer accounting for nearly 25% of deaths yearly. Heart disease is categorized as a chronic condition as it inflicts health deterioration over many years and is traced to lifestyle factors in most cases. 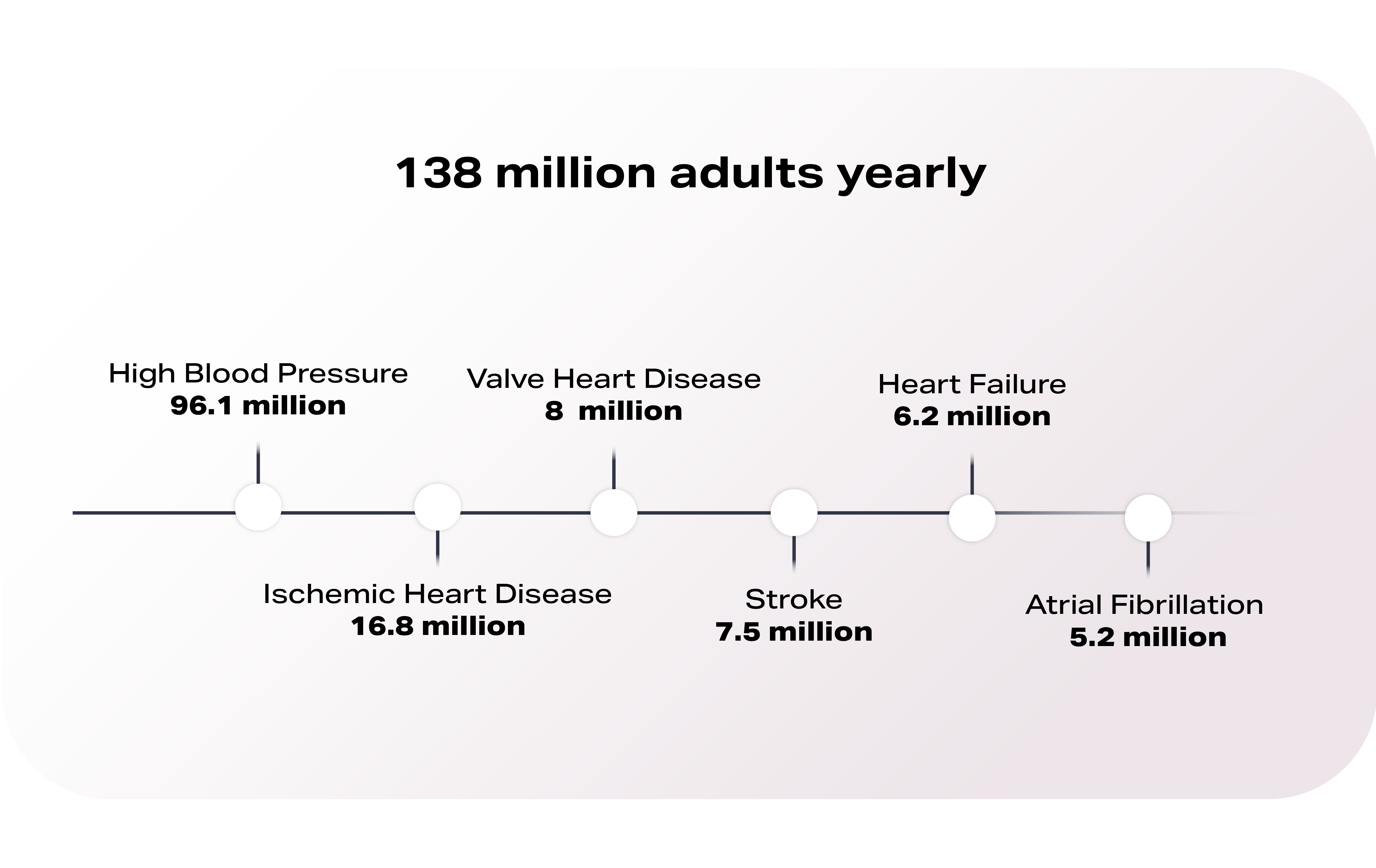 Heart disease is not an isolated condition

With the exception of cancer, the scientific community now openly acknowledges that heart disease, lung disease, and diabetes are highly interlinked in terms of their underlying lifestyle drivers and their high degree of comorbidity (one leads to the other). Their complex is now referred to as “Cardio-metabolic” disorder.

The cardio-metabolic disorder has primarily lifestyle drivers, which for the most part can be traced to poor nutrition and lack of exercise. No matter the contribution of one or the other in the occurrence of cardiometabolic disease, its advent can always be traced to the oxygen chain. Specifically, a disruption of the oxygen chain in any of the three basic components, heart, lungs, and cells, is directly related to the advent of the respective cardio-metabolic disease, namely heart disease, lung disease, and diabetes.

In simple words, this means that by analyzing and monitoring the oxygen chain, one can early detect predisposition for heart disease, lung disease, or diabetes.

How Breath Analysis can help identify the presence of Heart Disease

Although hypertension can lead to serious complications and is typically a gateway condition to serious disease, it doesn’t pose the same health concern as the remaining types of heart conditions such as IHD, heart failure, or valve heart disease. These more advanced types of heart disease indicate that the heart itself has already started to malfunction and is putting one’s life at risk. Let’s now dive into how this malfunction can be revealed by analyzing a person’s oxygen chain.

As we explained previously, the two most common types of heart disease are ischemic heart disease and heart failure, resulting in the heart working less effectively as a muscle and delivering less oxygen to the body. This is monitored through 4 biomarkers of metabolic analysis, namely:

Let’s look into how these variables detect the presence of IHD and heart failure.

Ischemic Heart Disease: Studies have shown that the onset of IHD causes the heart to be less effective in delivering oxygen to the body when the existing blockage starts to become critical. For as long as exercise intensity is low, the oxygen delivery requirements to the working muscles are low, therefore, the heart doesn’t need to beat as fast and strong, and thus the amount of “working” blood is enough despite the existence of a clot limiting its supply. However, as exercise intensity increases, the heart needs to beat faster and stronger, and there comes the point where the amount of “working” blood supplied to the heart is no longer enough because of the blockage caused by the clot. That causes the heart to increase its beating at an accelerated pace and the amount of oxygen delivered to the body per beat to drop. That’s reflected by a sudden flattening or decline in O2pulse, the metric that demonstrates the amount of oxygen absorbed by the body per heartbeat, and a sudden increase in heart rate.

Heart Failure: As discussed, heart failure is a condition during which the heart weakens as a muscle. This is typically caused by a lack of exercise and a sedentary lifestyle. The weakening of the heart leads it to less force and thus reduces the amount of oxygen that can be delivered to the body. This is manifested in reducing the maximal amount of oxygen a person can consume and increasing the VE/VCO2 slope. A lower VO2max indicates the body’s reduced ability to absorb oxygen due to a weaker heart pushing less oxygen-rich blood into the body. A higher VE/VCO2 slope indicates reduced breathing efficiency denoting that takes a person more breaths to exhale a set amount of carbon dioxide due to a weaker heart transferring less carbon dioxide-rich blood towards the lungs for carbon dioxide to be exhaled through exhalation. In the clinical world, VO2max and the VE/VCO2 ratio provide the gold standard for identifying the presence of heart failure, monitoring the progression of the disease, and determining the right point for a heart transplant. 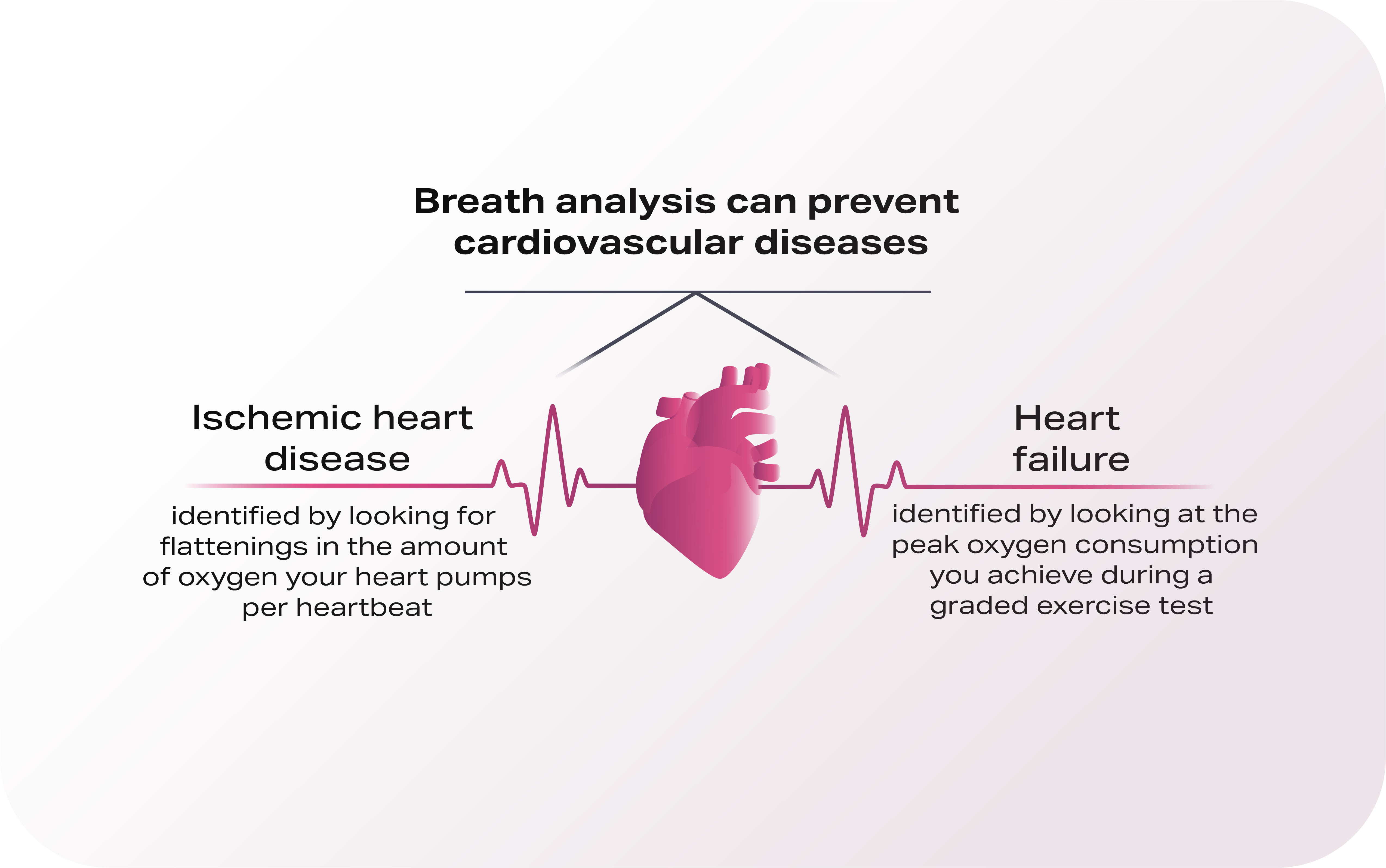 Heart disease is perhaps the most important health concern for any middle-aged individual. As highlighted, heart disease is also known as the silent disease as it builds up over many years before manifesting when it reaches a critical and potentially life-threatening stage. Despite its widespread prevalence and deadly nature, heart disease is fully preventable if diagnosed early and treated accordingly through medication and lifestyle interventions. Routine screening and early detection of heart disease are the cornerstones for addressing this epidemic. Breath analysis is a critical measure against heart disease as it provides an easy, accurate, and non-invasive way of determining its presence or predisposition. Consider bringing it up to your cardiologist, general practitioner, or family medicine doctor during your next visit.