How breathing impacts emotions and pain

We have all experienced moments of fear, excitement, and pain. In almost every case, the onset of these sensations and sentiments is accompanied by a sudden alteration in how we breathe.

Breathing is the most vital recurring function in the body because it’s responsible for supplying oxygen to our cells which is vital for our immediate survival. Oxygen deprivation for more than a minute will cause irreparable brain damage and death. Consequently, our breathing apparatus, which includes our lungs, nose, mouth, and supporting muscles, is highly interlinked with our brain.

This interconnection causes the brain and lungs to be highly interdependent, with one affecting the other in ways that the scientific community is only now starting to uncover. Some fascinating ways our breath affects our brain are by altering our mood and how we experience pain. This blog post will dive deep into neurological aspects of the brain-breathing axis that impact pain and emotions.

The bi-directional connection between the brain and lungs

The brain is the central computer of our body. The organ sends signals across the entire body that regulate every autonomic (e.g. heartbeat) and volitional function (e.g. movement of our hands). To relay signals, the brain uses our nervous system, which constitutes the wiring through which information is sent from the brain to organs, glens, and other parts that respond by performing necessary functions.

This connection, however, isn’t uni-directional as many of us would initially assume but bi-directional. This means that the brain isn’t just sending signals to organs. It’s also receiving. The receipt of signals, in turn, influences brain functions and thus the way we experience feelings and sensations. 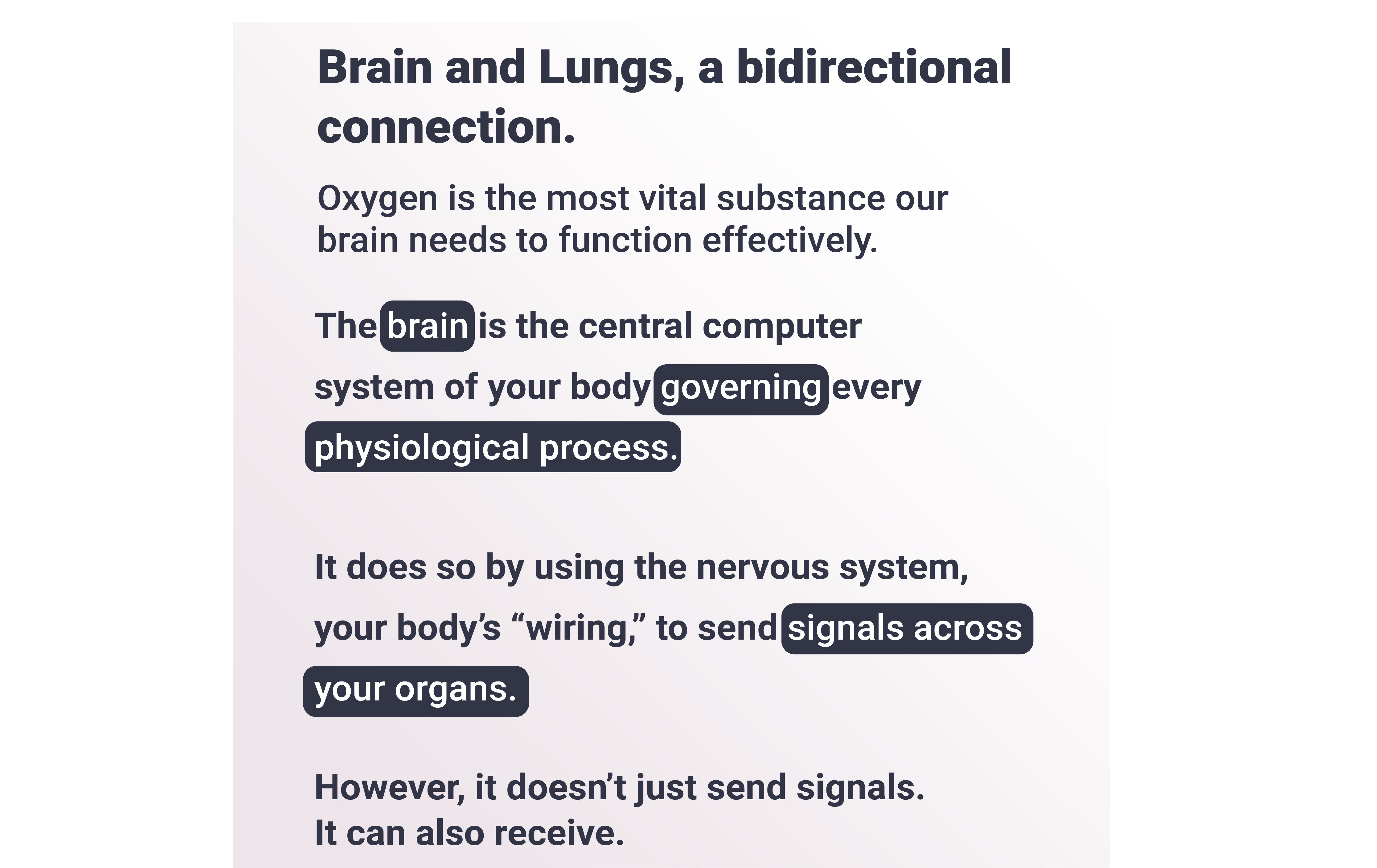 Several organs and systems around the body are connected in a bi-directional fashion with the brain. Among the most active ones are the lungs, gut, and heart. This article will focus on how the lungs and the entire breathing apparatus send signals to the brain.

How breathing can influence emotions

The (LC) is the major noradrenergic nucleus of the brain, meaning that it’s a section responsible for the production of norepinephrine, a substance that’s used to mobilize the brain and body in preparation for action. This substance’s release is lowest during sleep, increases when we are awake, and peaks when exposed to highly stressful situations. 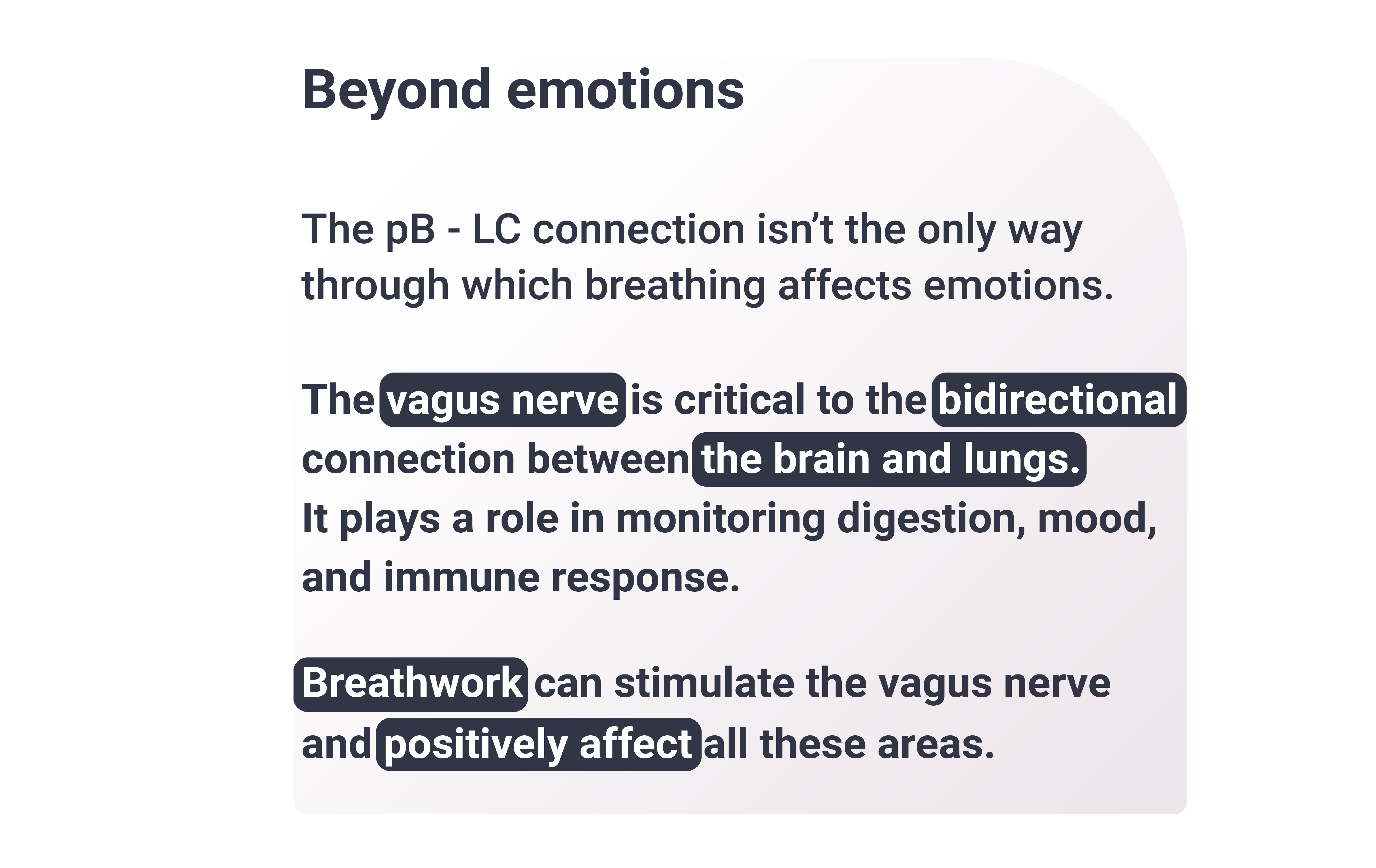 The general function of norepinephrine is to mobilize the brain and body for action. Norepinephrine release is lowest during sleep, rises during wakefulness, and peaks during exposure to stressful circumstances when our fight-or-flight response is triggered. When secreted in the brain, norepinephrine instigates arousal, initiates alertness, promotes vigilance, enhances the formation and retrieval of memory, and focuses attention. Moreover, it brings about restlessness and causes anxiety. Lastly, to prepare the body for action, norepinephrine causes a series of physical effects. These include an increase in heart rate and blood pressure, the release of glucose that provides immediate energy for muscles, elevates blood flow to skeletal muscle, and suppresses blood supply to our digestive system (i.e. stomach). As a result, LC is a major center that regulates arousal and autonomic functions.

The pB-LC connection means that signal participating in the bi-directional connection between the breathing apparatus and the pB will inevitably affect LC. The effects on LC will influence our arousal state, level of autonomic activity, and the degree to which our “fight or flight” mechanism has been engaged. Consequently, the rate, depth, and intensity of our breathing can influence our level of psychophysiological agitation and emotional state.

Another link between the brain and breathing apparatus is the Vagus Nerve (VN). The vagus nerve is the principal element of the parasympathetic nervous system, which controls several critical physiological functions, including our mood, heart rate, immune response, and digestion.

The VN is highly interconnected with our gut and breathing apparatus. As a result, it is now widely known that specific breathing exercises such as deep diaphragmatic breathing can stimulate the vagus nerve and thus bring about positive effects on several neuropsychiatric conditions. The VN can affect our emotions through its connection to several other parts of our brain that are responsible for regulating autonomic function, our level of arousal, and thus stress levels. One such powerful connection is with LC. Indeed studies have shown that vagus nerve stimulation can cause neuronal firing in the LC within minutes, leading to an increase in norepinephrine levels within the hippocampus, amygdala, and prefrontal cortex. This increase in norepinephrine has been shown to produce positive effects in treating neuropsychiatric disorders such as epilepsy.

How breathing can influence pain

Breathing and pain are two physiological functions we all know to be highly interconnected based on our experience. We have all felt our breathing change immediately after exposure to a stimulus that causes an adverse feeling of pain. This connection between pain sensation and breathing is only starting to be unveiled and understood through analyzing a part of the brain called the lateral parabrachial nucleus (PBL). This brain area is crucial for coordinating breathing in mice.

PBL is also responsible for regulating neuropathic pain. Neuropathic pain, also known as chronic pain, is a chronic condition caused by lesions of the peripheral or central nervous system. These lesions or parts of abnormal tissue are created by factors such as trauma, stroke, diabetes, tumor invasion, and multiple sclerosis. Using methods such as common peroneal nerve ligation, behavioral testing, and brain signal imaging, scientists found that PBL is responsible for relaying pain signals and processing neuropathic pain.

The involvement of PBL in breathing function and its ability to be influenced by our breathing apparatus opens the possibility for combating pain through breathing training. Another piece of proof around the connection between breathing and pain bridged by PBL is the effects opioids use to suppress feelings of chronic pain. These substances suppress pain but also lower one’s breathing rate due to their involvement in the PBL region. Thus most deaths resulting from opioid overdose result from breathing arrest caused by the excessive suppressing of the subject’s breathing function.

Leveraging the bi-directional connection between breathing and the brain, one may affect a series of positive changes in the brain that can help combat neuropsychological disorders and chronic pain. This is because breathing can send signals to various parts of the brain that are interconnected and responsible for regulating emotions, stress levels, autonomic functions, and pain sensations.