Oxygen: The ultimate measure of longevity

Oxygen is the molecule of life. It’s involved in every reaction in our body necessary to sustain life and movement. It’s also the foundational element for long and high-quality life.

Without oxygen, death is inevitable. Luckily, our body houses a unique computer system that allows us to breathe without thinking about inhaling and exhaling. Our brain and neurons ensure that oxygen exchange and transport of oxygenated blood across every cell in our body happens seamlessly in the background.

In this article, we will deep dive into the mechanisms through which oxygen is the cornerstone of longevity, the research that stands behind this statement, and how its absorption by our body can be measured to provide a clear assessment of longevity and health.

To better understand the statement “Oxygen is the molecule of life,” we should first understand how and why our bodies use oxygen.  Oxygen is the catalyst for energy release in every cell, a process necessary to sustain life and power movement. This mechanism involves using oxygen to oxidize or, in other words, “burn” nutrients we consume. These nutrients consist primarily of fats and carbohydrates. This burning process is similar to what happens in your fireplace when you set a piece of wood aflame, and oxygen interacts with wood in a chemical reaction to release energy, in this case, heat. The oxidation of nutrients releases the energy our cells use to stay alive, move, and power other vital functions. Although this process may sound simple, it involves several systems in our body and employs most of the core organs. Here’s how this process works:

This process is also known as Aerobic Metabolic or Cellular Respiration. Aerobic comes from the Greek word “Aερας” (aˈe.ɾas), which means air and refers to the presence of oxygen in the energy release process. Aerobic metabolic accounts for more than 95% of our overall energy generation and is distinct from the secondary energy release mechanism called Anaerobic Metabolism, which we will cover in a separate post.

What’s important to keep in mind from the process described above is that:

To understand how oxygen plays a crucial role in regulating the quality and length of one’s life, one should examine the relationship between the ability to utilize oxygen and the primary factors hampering longevity, namely chronic diseases.

Chronic diseases are typically conditions caused by lifestyle factors such as poor nutrition, lack of exercise, or tobacco use and inflict an ongoing reduction in quality and duration of life. 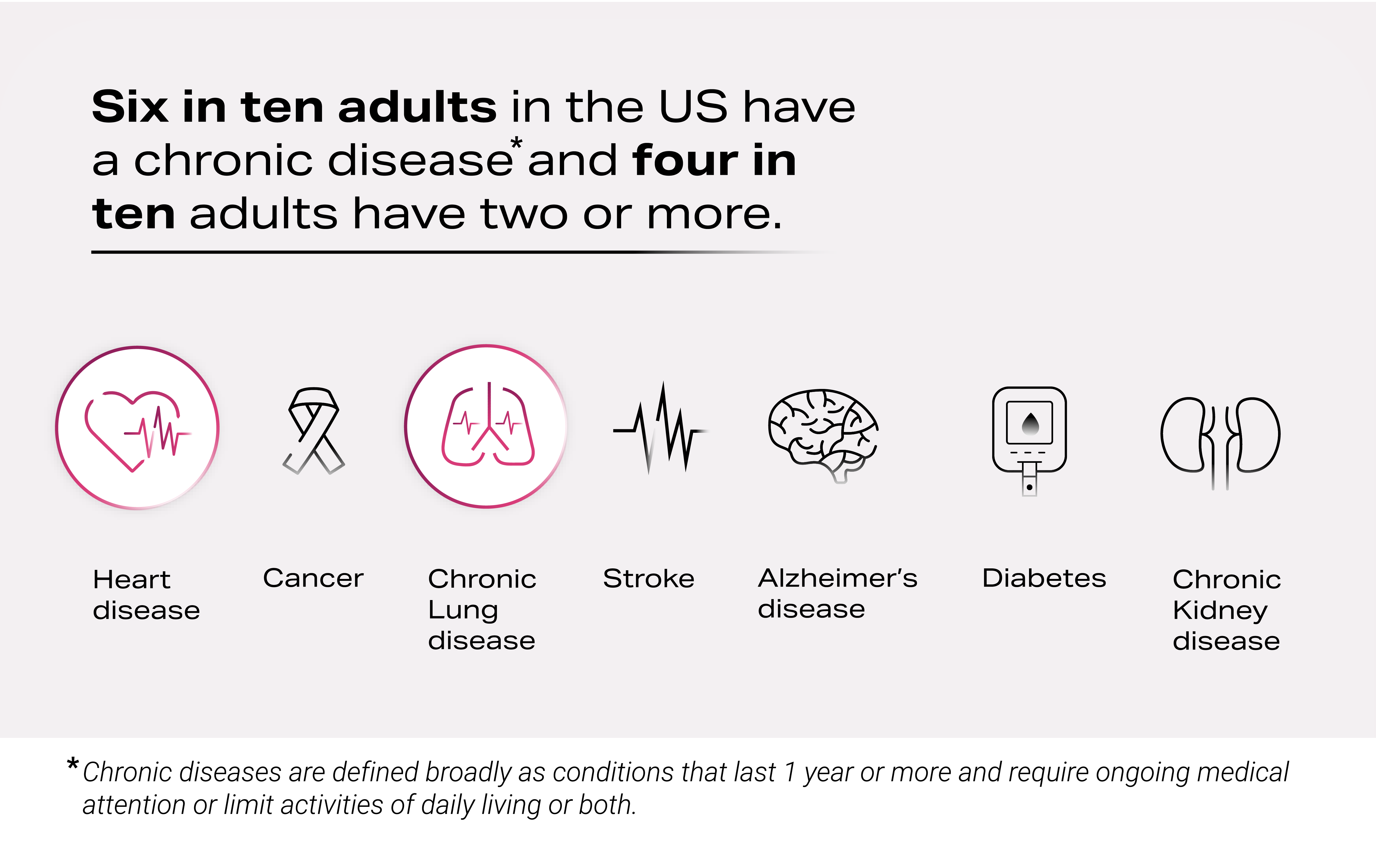 Besides cancer, the scientific community now openly acknowledges that heart disease, lung disease, and diabetes are highly interlinked in terms of their underlying lifestyle drivers and their high degree of comorbidity (i.e., one leads to the other). The term used to characterize this collective disorder is “Cardio-metabolic Syndrome.”

Cardio-metabolic syndrome is driven primarily by lifestyle factors, which for the most part, can be traced to poor nutrition and lack of exercise. No matter the contribution of exercise or nutrition to the cardiometabolic syndrome, its advent can always be traced to the oxygen chain. Specifically, a disruption of the oxygen chain in any of the three fundamental components, namely heart, lungs, and cells, is directly related to the rise of the equivalent cardio-metabolic syndrome’s facet, namely heart disease, lung disease, and diabetes, respectively.

The implications of this phenomenon are significant for the early detection and prevention of these conditions. In short, analyzing and monitoring the oxygen chain can help early detect predisposition for heart disease, lung disease, or diabetes. Here’s a brief description of how oxygen denotes deterioration in each system.

The heart is our body’s blood pump and helps push oxygen-rich blood from the lungs to every cell. It’s also responsible for moving carbon dioxide-rich blood from the cells back to the lungs. Nearly every form of heart disease, including Ischemic Heart Disease and Heart Failure, causes the heart to be less effective in pumping oxygen-rich blood into your body. This manifests through a reduction in the amount of oxygen your body consumes per heartbeat. This is measured during a graded breath analysis test through a variable called O2pulse. A separate blog post covers a detailed review of how breath analysis can help detect heart conditions.

Nearly every form of lung disease will cause the lungs to be less effective in absorbing oxygen. Whether it’s Asthma, Chronic Pulmonary Obstructive Disorder (i.e., COPD), or Pulmonary Embolism, the effects are a reduced ability to absorb oxygen and deliver it to the bloodstream. The main breath variables used to detect this deficiency include the maximum amount of air lungs can exchange with the environment (i.e., MVV or maximum voluntary ventilation), the amount of oxygen transferred into the blood (i.e., SpO2 or blood oxygen saturation), and the maximum amount of air one can exhale during exercise (i.e., Peak VT or maximum tidal volume). A separate blog post covers a detailed review of how breath analysis can help detect lung conditions.

Diabetes is a condition in which cells cannot metabolize carbohydrates, thus leaving them in the bloodstream. The presence of carbohydrates in the bloodstream is toxic as it causes gradual degradation of every tissue in the body. The onset of diabetes can also be traced back to the oxygen chain, but this time on a cellular basis. When cells become less able to absorb and utilize oxygen, they become less able to oxidize fat as a fuel source. This leads to increased intramyocellular lipids levels (i.e., fat within muscles and tissue) and a higher blood concentration of free fatty acids. This, in turn, stimulates higher glucose release in the liver and further insulin secretion by the pancreas. Exposing your body to a constant state of increased insulin concentration in the blood makes your cells less “sensitive” to insulin leading to the onset of insulin resistance and, consequently, diabetes. A separate blog post covers a detailed review of how breath analysis can help detect predisposition to diabetes.

The importance of oxygen for long-term health has been established through studies examining the function of individual elements found in the oxygen chain (i.e., heart, lungs, cells) and its global function (i.e., overall oxygen consumption). The latter has been scrutinized through epidemiological studies that have examined the correlation between mortality risk and the total amount of oxygen one’s body can absorb. After decades of rigorous scientific research measuring peak oxygen consumption among individuals of various backgrounds, ethnicities, and ages and subsequently tracking their fatality rates over several decades, the scientific community concluded that cardio-respiratory fitness, AKA VO2peak or peak oxygen consumption, is the strongest predictor of how well and long someone will live. Although a low VO2peak can’t reveal the exact sub-system (e.g., heart, lungs, or cells) causing its deterioration, it can certainly indicate that at least one is facing an underlying problem and is thus a strong indicator of chronic disease onset. This immediately translates into a reduction in expected lifespan and quality of life. The findings of these studies were summarized in a landmark scientific statement published by the American Heart Association in 2016, which elevated VO2max into a critical vital sign that provides the strongest evidence about life expectancy and quality. Specifically, for every unit increase in VO2max, measured in Metabolic Equivalent (i.e., METs), one’s likelihood of death and onset of chronic disease declines by ~15%. Such is its predictive power that the American Heart Association openly called for implementing VO2max in annual physical examinations. 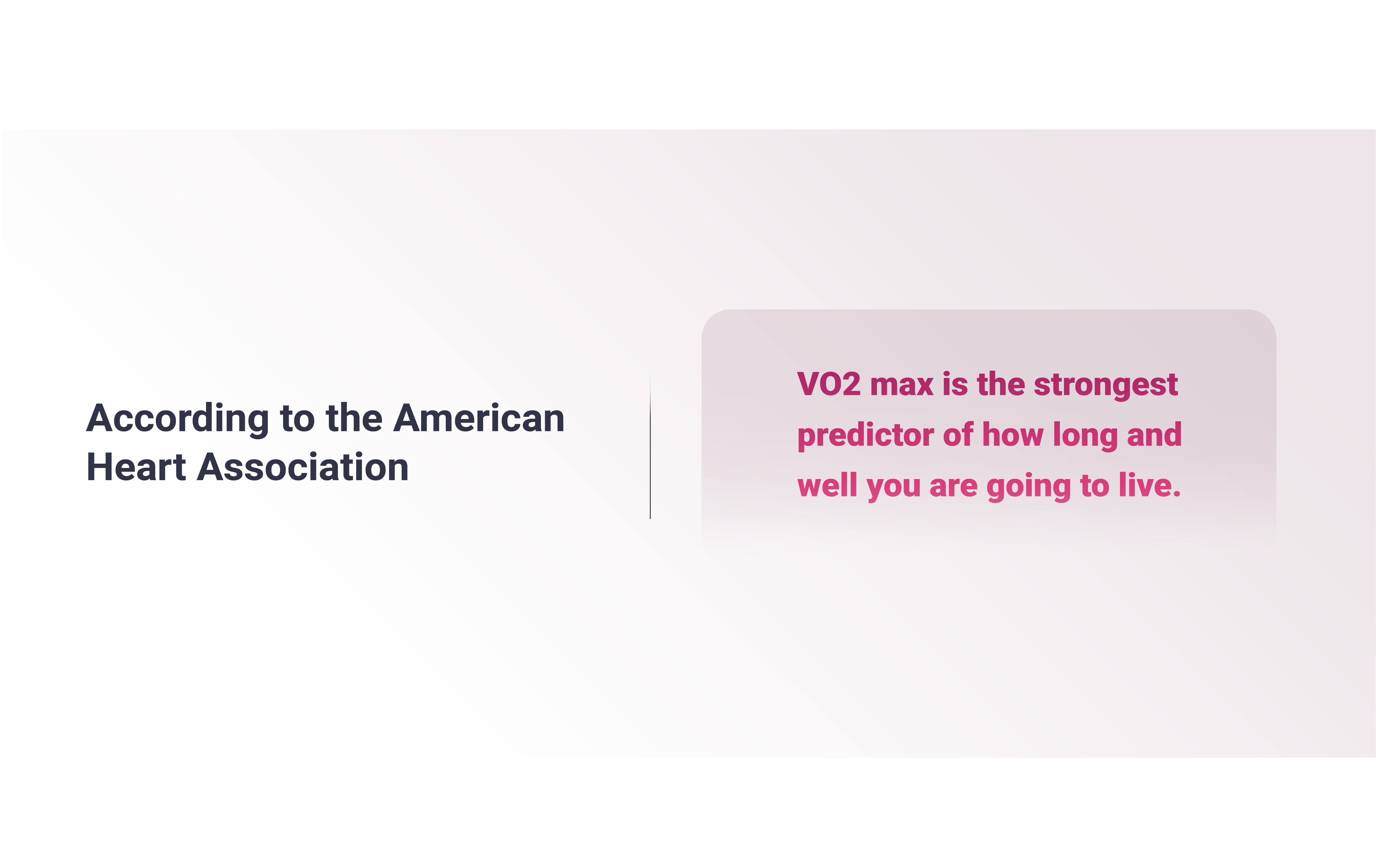 Most people train for life, meaning that a longer and better life is the motivation behind picking up a workout routine or cleaning up their diets. Therefore, assessing how effective a wellness routine is for one’s longevity goals is essential to its success. Breath analysis provides the gold standard in determining how the oxygen chain works globally and its components, thus indicating whether a wellness routine leads to a longer and better life. It does so while also pinpointing the sub-systems of the oxygen chain, namely lungs, heart, and cells that may have been impacted by age, lifestyle, or other factors that would require a closer medical examination. Ultimately, oxygen is the molecule of life. The way it flows through the body is the best picture of one’s health, and breath analysis is its most reliable measurement tool.