How breathing can impact your ability to think

We have all experienced moments of mental blurriness. When our cognitive capacity declines, we yawn constantly, our eyesight is perhaps compromised, we get tunnel vision, and we feel unable to perform at our best. All these phenomena are almost always accompanied by a concurrent alteration in our breathing.

Although breath has been an element of human existence for millennia, our understanding of the connection between the brain and breathing has only advanced considerably during the last decade. Specifically, during this period, an extensive body of research has revealed the fundamental and, most importantly, bi-directional relationship between the brain and breathing apparatus.

This blog discusses some key characteristics of the brain-breathing axis and explains how breathing can become a powerful tool in regulating brain function. 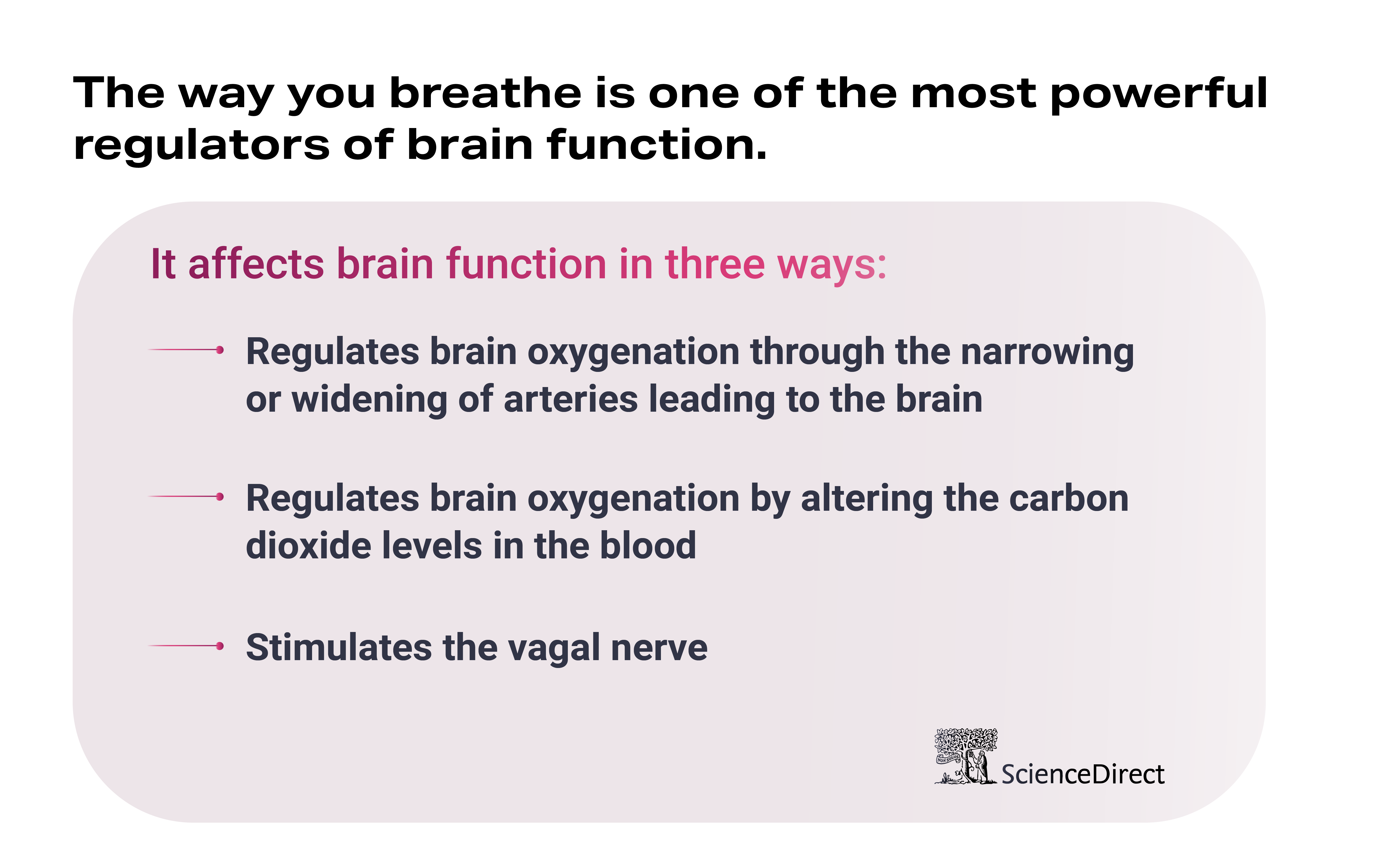 The human brain is one of the most metabolically active organs in the entire body due to its lack of oxygen and glucose reserve, two elements that are critical to maintaining its function. Consequently, the brain needs to ensure a continuous supply of oxygen and glucose, a process achieved through the Cerebral Blood Flow (CBF) mechanism.

Given the brain’s inability to store oxygen, a reduction in CBF will reduce its operation and cause feelings of fatigue, a decline in cognition, and in severe cases, even panic attacks. The way we breathe can profoundly affect the effectiveness with which our brain receives oxygen. Deep and slow breathing enhances brain oxygenation, whereas rapid and shallow breathing will cause an almost immediate decline in brain oxygen levels. A state of increased breathing frequency (i.e. faster breathing) combined with a reduction of tidal volume (i.e. shallower breathing) is also known as Hyperventilation.

Hyperventilation, also known as over-breathing, is a state where one is breathing against their metabolic requirements, causing a cascade of effects that impact the brain’s supply of oxygen. The two main effects are Vasonstriction and the Bohr Effect.

Before we dive deeper into the analysis of Vasoconstriction and the Bohr Effect, let’s first discuss the prevalence of hyperventilation and why it should concern the average person. Most of us have experience hyperventilation during states of physical or emotional agitation. For example, moments of intense pain, anger, anxiety, excitement, or fear have deregulated our breathing causing us to breathe faster and shallower. Typically this phenomenon is quite rare and acute, meaning that our breathing changes significantly and noticeably.

However, apart from this type of acute hyperventilation, a more common but subtly type of hyperventilation is Chronic Hyperventilation Syndrome (CHS). As one can expect, CHS is the state where one breathes slightly faster and more shallow than normal. Due to its chronic nature, one tends to get accustomed to it, leading them to start living while breathing “incorrectly” permanently. According to the NHS, approximately 15% of people suffer from CHS, with only a minuscule portion aware of its presence, making it one of the most commonly undiagnosed conditions impacting brain health and quality of life.

Despite its subtle nature, CHS still induces Vasoconstriction and the Bohr effect, albeit to a lesser extent, and thus deprives the brain of its necessary amount of oxygen.

Vasoconstriction is the state during which the arteries leading to the brain become constricted and narrower. This phenomenon leads to reduced blood flow towards the brain and concomitantly less oxygen supply.

The maintenance of CBF is called “cerebral autoregulation,” primarily achieved by the resistance arterioles. Arterioles are branched segments of arteries that protrude from one of our main arteries. The narrowing (vasoconstriction) or widening (vasodilation) of the arterioles regulates CBF in response to alterations in viscosity, arterial blood pressure, gas concentration, or metabolic needs. Changes in gas concentration and specifically, changes in partial pressure of CO2 (PaCO2), are one of the most potent stimuli that will cause contraction or dilation of the arterioles.

The attribute the cerebral arterioles possess to dilate or contract as a reaction to alteration in PaCO2 is called CO2 reactivity. The arterioles dilate PaCO2 increases (PaCO2 > 44 mmHg indicates hypercapnia) and contract when PaCO2 decreases (PaCO2 < 35 mmHg indicates hypocapnia). Hypercapnia and hypocapnia are terms used to describe the levels of CO2 in the blood and are derived from the Greek word “καπνός” (kapnos), which is used to describe the presence of CO2.

Hyperventilation will cause a decline in PaCO2 levels due to excessive exhalation channeling more CO2 out of the body. In other words, the state of over-breathing causes more CO2 to exit the body and PaCO2 levels to decline. Given the arterial CO2 reactivity, arterioles will contract and restrict oxygen-rich blood from reaching the brain.

The second mechanism through which breathing affects brain oxygenation is called the Bohr Effect. To understand this phenomenon, we must first examine the role that hemoglobin plays in transporting oxygen from the lungs to the cells around the body.

Once oxygen enters the lungs through inhalation, it is attracted and captured into the bloodstream when it comes into contact with the alveoli. The alveoli are tiny sacs within the lungs (small branches protruding from the bronchi) where oxygen commons into contact with the bloodstream. In the blood, a special hormone called hemoglobin acts as “glue” for oxygen molecules and forced them into the bloodstream. This mechanism enables the oxygen transfer from the air we inhale into our bodies. The affinity, or “tightness,” with which oxygen attaches to the hemoglobin is regulated by blood CO2 levels.

The mechanism through which CO2 levels impact the oxygen-hemoglobin affinity is pH regulation, or the acidic and base balance in the blood, a phenomenon that’s also known as respiratory alkalosis. A decline in PaCO2 leads to an increase in pH, making the blood less acidic and causing higher oxygen-hemoglobin affinity through their dissociation curve. 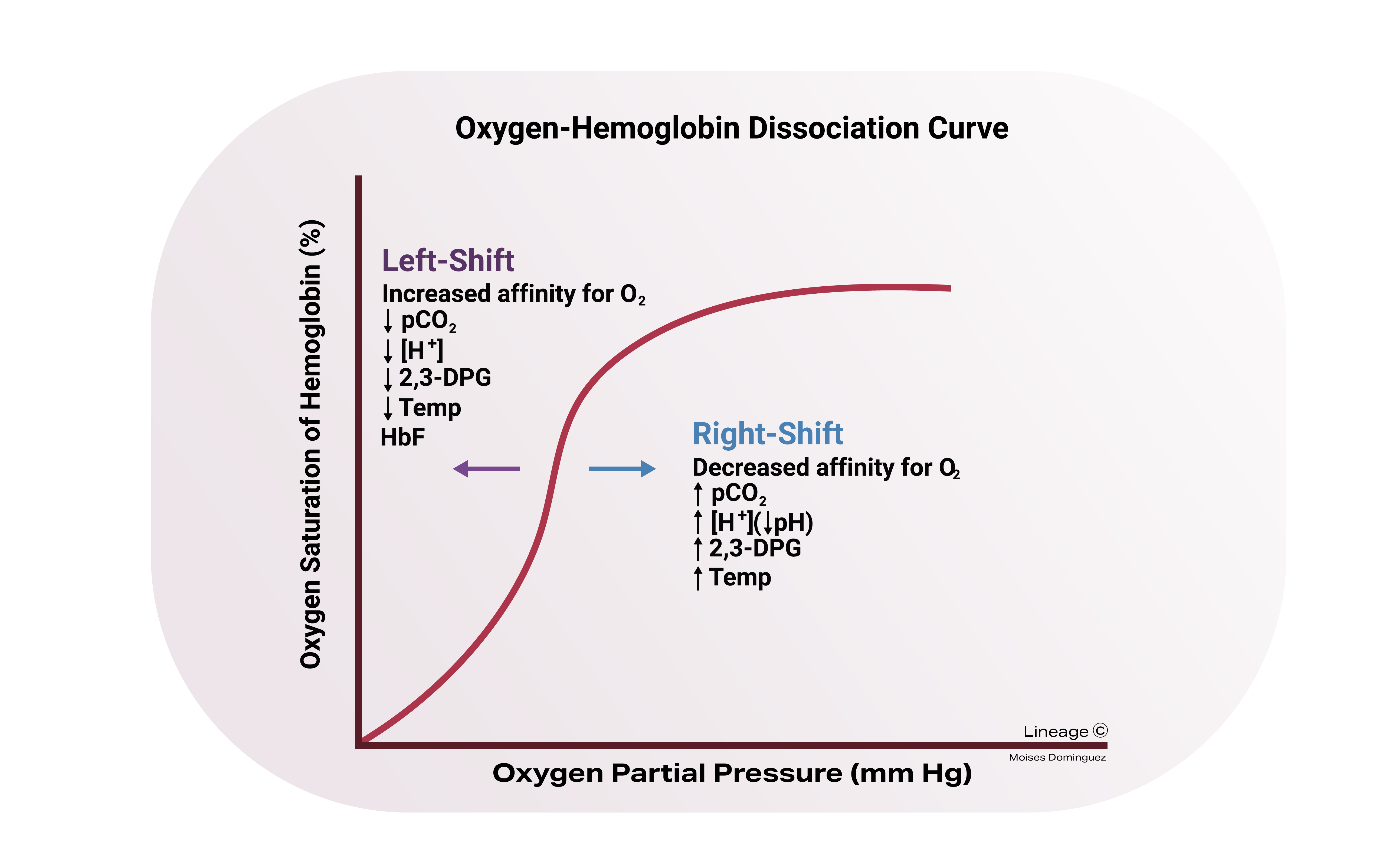 The higher association between oxygen and hemoglobin makes oxygen molecules less able to get detached from hemoglobin and enter tissues around the body where they can be used to oxidize nutrients. Consequently, cells receive less oxygen and are less able to perform their functions. This phenomenon can cause permanent tissue damage or even death if respiratory alkalosis reaches critical levels for prolonged periods.

Hyperventilation is undeniably a condition that can seriously affect long-term brain health and quality of life. Its chronic and subtle nature makes it unnoticeable by most, leading it to become one of the most undiagnosed illnesses in modern society. Although in most cases, it’s impossible to ascertain the cause or even distinguish between psychological or physiological causes, its effects on our ability to think and perform cognitive tasks are the same.

Hyperventilation may be caused by physiological triggers. These include respiratory diseases such as asthma and COPD, infections such as pneumonia, and head trauma, which can cause the brain to alter one’s breathing patterns.

Our stressful way of life, widespread exposure to respiratory pathogens (i.e. COVID19), and propagation of chronic lung conditions (e.g. asthma, COPD) should render hyperventilation cause for concern for the everyday person. Regardless of its source (i.e. psychological or physiological), its presence can easily be traced through the use of metabolic breath analysis, which analyzes the breathing rate as well as levels of carbon dioxide exchange with the environment. Identifying the disease can mean the end of a long and painful journey for many trying to understand the route cause of their dizziness, propensity for panic attacks, or constant yawning. Once diagnosed, the treatment can include anything from breathing training to reduce the patient’s breathing rate, counseling, or, in some cases, medication. In any case, however, becoming aware of chronic hyperventilation syndrome is undoubtedly the first step toward addressing a constant state of fatigue and realizing one’s entire cognitive potential.

If your chronic hyperventilation is potentially an issue for you, keep in mind that guided breathing training is perhaps the most immediate and effective solution. Breath is the only core physiological function that can influence how your brain works and is in your control.